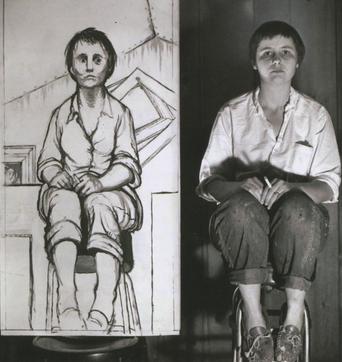 ​Liz Whitney Quisgard in her studio with a self-portrait drawing. November 1957. Photograph by Ricard Stacks

for The Baltimore Sun. Collection of the author.

In my Youthful “truth seeking " days , I wrote realms of justification for my work. Now that the work has matured, and I, simultaneously, put less and less value on truth, words have become irrelevant. So when called upon to explain what I do, I am inclined to say “What you see is what you get.”

Couched in this flippant response is a firm conviction that the visual arts are exactly that – visual. No meanings. No preachments. No symbols. Politics; philosophy; the human condition; the environment and other causes about which people paint, perform, sculpt these days are subjects for discourse – best expressed with words. Attempts to transform them into pictorial images tend to become mere illustration – most often jejune.

My goal is to surprise and engage the mind by seducing the eye. Toward that end, I reply on pattern. The term decorative

has been applied to my work – most often in a negative sense. But that’s okay with me, for some the most important art is essentially decorative: Islamic rugs; Greek column capitals; Navajo textiles; Byzantine mosaics; Baroque architectural embellishments….and so forth.

We all understand a row of triangles, a strip of squares, an arrangement of circles and swirls. No need to ask their meaning. They simply are what they are. They speak to us universally and without apology. 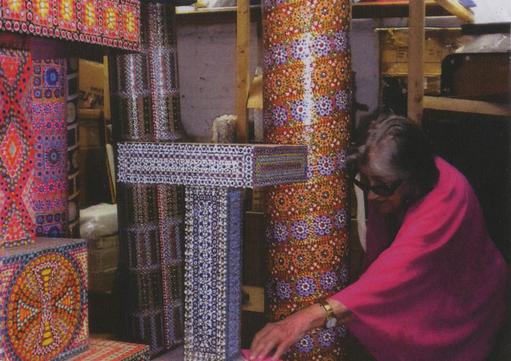